Most people are surprisingly bad at spotting fake smiles. One possible explanation for this is that it may be easier for people to get along if they don’t always know what others are really feeling.

Although fake smiles often look very similar to genuine smiles, they are actually slightly different, because they are brought about by different muscles, which are controlled by different parts of the brain.

Fake smiles can be performed at will, because the brain signals that create them come from the conscious part of the brain and prompt the zygomaticus major muscles in the cheeks to contract. These are the muscles that pull the corners of the mouth outwards.

Genuine smiles, on the other hand, are generated by the unconscious brain, so are automatic. When people feel pleasure, signals pass through the part of the brain that processes emotion. As well as making the mouth muscles move, the muscles that raise the cheeks – the orbicularis oculi and the pars orbitalis – also contract, making the eyes crease up, and the eyebrows dip slightly.

Lines around the eyes do sometimes appear in intense fake smiles, and the cheeks may bunch up, making it look as if the eyes are contracting and the smile is genuine. But there are a few key signs that distinguish these smiles from real ones. For example, when a smile is genuine, the eye cover fold – the fleshy part of the eye between the eyebrow and the eyelid – moves downwards and the end of the eyebrows dip slightly.

Now I want to talk about other smiling faces you often see, but their meaning and expression is quite different from the usual smile. Here is a list of smiles that you can currently wear – for all ocassions.

You know that smile – the self satisfied, arrogant and kinda of evil smile.

Lips – Usually pressed together and only one side coming up. Can be done with a lips slightly separated. The upper lip may also rise a bit.

Eyes – Can narrow a little to create some kind of suspicious look.

Usually a sign of self satisfaction, arrogance and expression of superiority.
It can also be a sign of doubt and an attempt to dismiss someone’s opinion.
If the upper lip rises – it’s probably a sign of ridicule.

Interestingly, it can be used in flirting as a sign of humor and playfulness – to try and catch attention and interest from the other side.

This smile is quite similar to the smug, only with a slight adjustment and a different meaning.

Lips – One half of the lips creates a smile, the other half expressing frown. It’s actually not that natural to make this face expression, so it’s quite rare in my experience.

It sends a conflict message – is it a smile or a frown? Usually it’s a sign of sarcasm, embarrassment or cynicism.

This smiling face can stir some protective and attentive emotional response in the eyes of the viewer – we connect to the person with his half smile, and feel empathy because of the sad half.

A BIG smile with an open mouth. 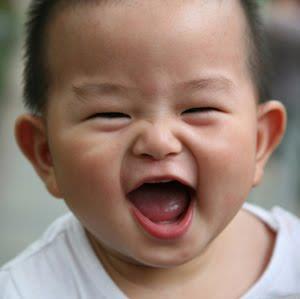 Lips – A wide open smile with the jaw drops down – it looks like a frozen laughter.

Eyes – Can crease and arch just like in a genuine smile.

It’s a more trained smile really… used to draw a lot of positive attention and suggests happiness mixed with playfulness. You can see a lot of politicians and actors with smiling faces like these for photogenic photo. If you want to look more photogenic and happy in your photos you can try practicing this one. Just think of something funny and smile.

The title speaks for itself, no?

Lips – The lips are pressed together and forming a smile. Can be short, can be wide…

In both cases the meaning is quite the same. The person can be happy but restraining himself, or not completely showing his feeling or thoughts.

A natural smile produces characteristic wrinkles around the eyes-insincere people smile only with their mouth.

OK, let’s conclude all this happiness – I hope your face muscles got a little practice, and you learned a thing or two.

So, we discussed the meaning and power of the smile in body language. We learned to identify real smiles from fake ones, and now we know how discern different types of smiling faces… I didn’t list them all here but I showed you a lot, so you can identify other varieties yourself. Just remember as always – it’s only guidelines, use them to guide you to reveal more, don’t judge people based only on one face expression.

15 thoughts on “How to identify a fake smile?”